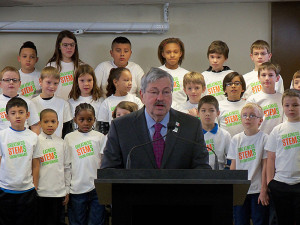 “I thrilled to roll out our new brand to students, families, educators, corporate partners and others, because we believe all interest parties will connect with this idea — that ‘Greatness STEMS from Iowans’,” Branstad announced while standing in front of several Greenwood Elementary students.

STEM stands for Science Technology, Engineering and Mathematics. “Our new logo leverages the STEM acronism and prominently ties it with our state’s agricultural roots and strengths,” according to the governor.

The governor appointed a STEM Advisory Council to work with schools and businesses to try to expand STEM education opportunities. He says this new campaign is aimed at the public. “Because what we’ve found is — although schools, educators and business people have very much embraced this — if you take a survey and asked the average Iowan, they don’t have a clue about what STEM stands for,” Branstad says. “So, this is really more of a public awareness campaign.”

The governor says everyone in the state needs to know about the efforts to get more kids interested in the STEM areas. “Well, it is important because this is where the really good jobs of the future are. It’s estimated that these are better paying jobs,” Branstad explains. He says the STEM effort will increase the number of Iowans in the STEM jobs pipeline.) “Indications are there’s going to be a lot of growth in STEM jobs,” the governor says, “even today we have STEM jobs that are going unfilled because we don’t have people with the right skill set.”

The West Des Moines marketing firm, Strategic America, has created the campaign and the governor says $150,000 from the money set aside by the legislature for the STEM Advisory Council will fund it along with $160,000 in service and donated time from the company. 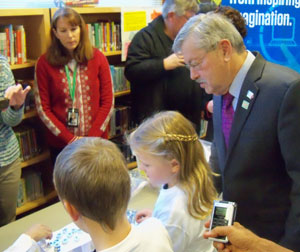 Following the announcement, Governor Branstad visited with groups of Greenwood students who put together stem projects last year. One group of students told the governor they were making a windmill and testing out the best size and shapes of blades to use. Another group used paper columns and metal nuts and bolts. “We are trying to build four columns and then we’re stacking a paper over the four columns and we’re trying to see how many bolts we can stack on the four columns without them falling down,” a student explained to the governor. The students all wore white t-shirts with the new STEM logo on them.