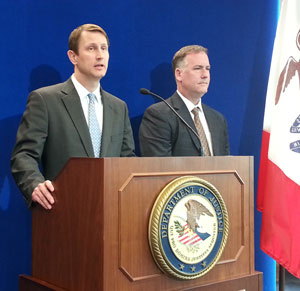 A Chinese national who became a resident of the U.S. through a work visa has been arrested for stealing trade secrets of bioengineered corn from two seed manufacturing companies in Iowa and Illinois.

Nicholas Klinefeldt, the U.S. Attorney for the Southern District of Iowa, discussed details of the case at a news conference in Des Moines this morning. Mo Hailong, who worked for a seed corn company in China, was arrested Wednesday in Florida. “This investigation began in the summer of 2011 with a tip from Pioneer of suspicious activity by an individual in one of their testing fields,” Klinefeldt said. “That individual turned out to be Mo Hailong.”

A short time later, Monsanto officials also reported an individual, later identified as Hailong, digging up plants in their fields. Klinefeldt said the CEO of Kings Nower Seed and four other employees are co-conspirators in the case, but they are living in China or Canada and have not been arrested.

Hailong is charged with conspiracy to steal trade secrets. If convicted, he could face up to 10 years in prison and a $5 million dollar fine.  “The estimated potential loss of an inbred seed line would be 5 to 8 years of research time and 30 to 40 million dollars,” Klinefeldt said.

Hailong will be tried in Des Moines, according to Klinefeldt. Thomas Metz, a special agent in charge with the FBI in Omaha, joined Klinefeldt at today’s news conference.  “The goal of individuals participating in this scheme was to obtain the benefit of research and development by U.S. companies without making the same investments themselves,” Metz said. “Theft of trade secrets then allows these companies to undercut U.S. companies on a global basis, as they often times can sell the products they’ve stolen on a cheaper basis than the U.S. corporations.”

Klinefeldt said Hailong, in February 2012, used an assumed name and took tours of both Monsanto and DuPont Pioneer facilities. He also attended World Food Prize festivities and a state dinner in Iowa for the vice-president of China.