You are here: Home / News / NASCAR introduces new president of the Iowa Speedway 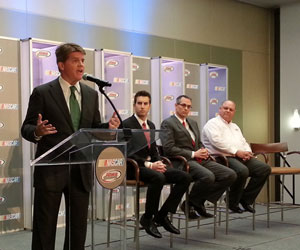 NASCAR, which was unveiled as the purchaser of the Iowa Speedway in Newton late last month, has hired a new president of the auto racing facility. Jimmy Small, a 28-year-old suburban Detroit native, was introduced today at a news conference in Des Moines. “It is an honor and a privilege to be standing in front of you and accepting the position as the new president at Iowa Speedway,” Small said. “This is truly a dream come true.”

Small learned in late September he would become the track’s president if NASCAR purchased the facility, which opened in 2006. “NASCAR and the State of Iowa share great histories and traditions in racing and that has been truly evident with the support we have seen at the Iowa Speedway since its inception,” Small said. “We wholeheartedly accept the responsibility to put on a fun and entertaining product that will make fans happy and make sure they keep coming back.”

NASCAR officials have stated a Sprint Cup Series race is not likely, at least anytime soon, for the Iowa Speedway. Eric Nyquist, NASCAR Vice-President of Strategic Development, was asked about the plans stock-car racing’s sanctioning body has for the track in Newton. “We will be exploring…looking at other forms of racing, other ways we can bring entertainment value to the venue. In the near term, I think that’s what you can expect,” Nyquist said.

Small, who most recently worked with Jill Gregory — the head of NASCAR’s Industry Services Department, said he simply hopes to take the Newton facility to “another level.”  “It’s still too early to determine what specifically that means, but in the short term the quick answer is, having worked in Jill Gregory’s group, I know how many resources NASCAR can provide to race tracks, race team, et cetera. We’re going to take full advantage of those resources,” Small said.

Nyquist said NASCAR’s decision to buy the Iowa Speedway was based in large part on the area’s “passionate” fan base. “The passion and support that Iowans brought from the very get-go with this speedway, I think really blew a lot of people in our industry away,” Nyquist said. “As we see it, the acquisition of Iowa Speedway for NASCAR, is a long-term strategic play for our sport. It has everything to do with the fan base that lives here and is around the upper Midwest.”

Newton Mayor Mike Hansen also spoke at the news conference. “When I first found out who was the potential purchaser of the Iowa Speedway, do you know how difficult it was to keep to myself? We don’t have to do that anymore,” Hansen said. Hansen said NASCAR’s presence in Newton could bring “exciting opportunities” for the city.