You are here: Home / Human Interest / Puppies found out in the cold end up at the North Iowa Humane Society 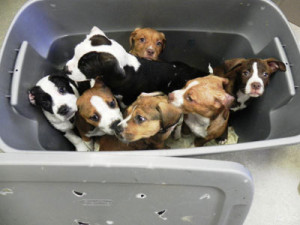 The adoption process has started for seven puppies that were found cold and wet inside a storage bin along a Mason City street. The Humane Society of North Iowa says a young man showed up at the shelter last week, saying he saw the plastic tote sitting on the curb with a sign that said “free puppies.”

The unidentified man loaded the storage tote into his car and brought the pups to the shelter. Humane Society of North Iowa executive director Sybil Soukup says the puppies are in good health, but the bitter cold could have caused serious hypothermia or death.

A seven-day holding period has expired and the puppies, which are believed to be a Boxer mix, are now available for adoption.