You are here: Home / Agriculture / Branstad reacts to corporate spying allegations against man from China 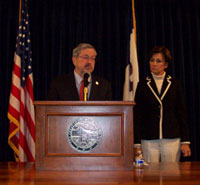 Governor Terry Branstad does not expect additional security for Chinese nationals visiting the state of Iowa as a result of last week’s arrest of a Chinese man accused of trying to steal trade secrets out of Iowa corn fields.

“I want to commend the FBI and the people that were able to detect this espionage going on and arresting the people that were responsible for it,” Branstad says. “I think it’s critically important that everybody understand…intellectual property needs to be protected and it will be in this country.”

Branstad has been a frequent visitor to China. The governor established a sister-state relationship with the Hebei province in China and Branstad has hosted Chinese visitors in Iowa. The Chinese national arrested last Wednesday attended the elaborate dinner Branstad hosted at the statehouse in 2012 for the man who is now China’s president.

“There were 1600 people at that state dinner. I’m sure there are probably other people that maybe have some things that are questionable in their background, too,” Branstad says. “But…there’s no way that we’re going to be able to detect everybody that comes to any event or any dinner.”

A Chinese national here in the U.S. on a work visa was seen digging up corn plants in Iowa fields in the summer of 2011. He took tours of Monsanto and Pioneer facilities in February of 2012. Branstad acknowledges the case puts some strain on Chinese/U.S. relations.

“It may present some additional challenges in terms of our relationship between the two countries,” Branstad says. “But this is a particular incident and we’ve been working for 30 years to build friendship, trust and relationships between our two countries and I don’t think this should prevent us from continuing to work together to improve opportunities for both the United States and China.”

Branstad visited China earlier this year and he hosted a large delegation of Chinese visitors in October.