You are here: Home / Sports / Cyclone Niang named Big 12 player of the week 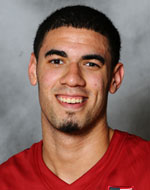 Iowa State remained ranked 17th in the AP basketball poll after their 85-82 come-from-behind win over Iowa Friday, while the Hawkeyes fell from 23 to 25. The Cyclones have a week off to enjoy the big win before they get back to business in Hawaii where they will play George Mason Sunday.

Cyclone coach Fred Hoiberg said the comebacks are exciting — but he’d rather see the team take the lead and hold it. Hoiberg said they have come back four times from double-digit deficits and he told the team he’d like to the quit making a habit of that and see them get some double-digit leads. “We’ve got three huge games coming up in Hawaii, come back for one more, and then go into conference play,” Hoiberg said.

The come-from-behind win moved ISU to 8-0 on the season. “We’re right where we want to be right now as far as the record is concerned, but we still have some work to do,” Hoiberg said. “That’s the positive about this team, is that there is still room to grow, we can still get better. And that’s the thing I am excited about.”

Cyclone sophomore forward Georges Niang was name the Big 12 player of the week for his performance against Iowa. Niang had a career high 24 points, including the winning layup with 18 seconds to go, and also had five assists, two steals and a blocked shot. Teammate Melvin Ejim talked about Niang’s ability after the Iowa game.”You know Georges is just a smart, smart player, he just has super control over his body and knows how to create space. And that’s one of the talents he has over any person — whether you are seven foot or you are very small — he can make that space and get his shot up all the time,” Ejim said. “And if you take that away, he can step out and take a shot. He is just an offensive nightmare.”

Ejim said it was not surprising to see Niang play so well against a good Hawkeye team. “Day in and day out he is coming in, he’s working hard, he’s playing well for us… Georges is a tough player to guard for anybody,” Ejim said. Niang is the fourth Cyclone to earn player of the week honors, joining Ejim, Dustin Hogue and Naz Long. DeAndre Kane has twice been named the league’s newcomer of the week.