You are here: Home / Business / New wind turbine purchase to create and keep hundreds of jobs 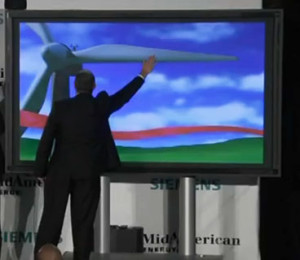 Branstad says it’s the largest economic development project in the state’s history and will create several new jobs. “Approximately one-thousand contraction jobs will be added to Iowa’s economy the next two years during the construction period,” Branstad says.

There are other jobs that go along with the wind project expansion. “Approximately 40 new permanent jobs will be added also in terms of the maintenance for the project. Of course, in addition to those jobs for MidAmerican Energy, it secures 500 jobs for Siemens in Fort Madison,” according to Branstad.

Loebsack credited Republican Senator Chuck Grassley with pushing legislation to created the tax credit for wind energy. “Chuck is often referred to as the father of wind energy here in Iowa, and I think throughout much of the country. He is responsible for that Production Tax Credit in the first place. And I think that tells us something about the bipartisan nature of wind energy,” Loebsack said.

Loebsack says the battle over the budget will keep congress from voting on extending the tax credit for wind energy before the end of this year, but he says it is something that has to be done.”We have to go back in January and fight like heck to make sure that we get things like the Production Tax Credit renewed at least for another year in lieu of any overall tax reform. I’d like to see that of course, but the reality of it is it’s unlikely to happened anytime soon,” Loebsack says. “So we’ve got to get the PTC renewed.”

Tom Kiernan, the CEO of the American Wind Energy Association also spoke at the event. “This is a precedent setting event — the largest order (of wind turbines) onshore every. Congratulations to all of you for making it happen, and also my congratulations to Iowa consumers. They’re going to be having more clean, affordable, home-grown electricity here in this great state,” Kiernan says. He says Iowa is part of a trend that has seen wind power lead the creation of new electricity. “Forty-two percent of all new electric generation was wind this past year,” Kiernan says. “And that’s because — yes there are environmental benefits and they are very important — but the cost. The cost of wind energy has dramatically decline.

Ninety-percent in the last two decades, 30-percent decline in wind energy costs in the last three years.” MidAmerican’s $1.9-billion order will be used on  five wind power projects located in Iowa. The  projects will generate a total of 1,050 megawatts of energy. The program ended in Fort Madison with some of the participants causing a virtual wind turbine on a video screen to spin to cut a virtual ribbon, signifying the start of production on the project.