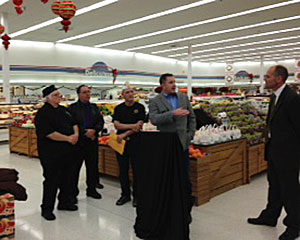 Democratic Congressman Bruce Braley of Waterloo says he’ll push congress in early 2014 to pass a plan that would both revive a tax credit for businesses that hire veterans and restore a cost of living increase for veterans’ pensions.

“My dad came home from Iwo Jima and one of the first things he wanted was a job and that’s been one of the things that’s motivated me and my advocacy for veterans,” Braley said during his last stop in West Des Moines. “I served on the Veterans Affairs Committee in the House when this alarming problem with unemployment for young veterans was at its peak.”

In June the unemployment rate among veterans who left the service after 9/11 was just over seven percent, but by this October it had risen to 10 percent. A tax credit of up to $9600 has been available to businesses that hire veterans, but it expires at the end of the year. Braley said that tax break should become permanent.

“For those employers who want to do the right thing and address this problem and reduce unemployment for our veterans, this is a great way to provide a little extra incentive,” Braley said.

Braley and other advocates for this tax break were unsuccessful in getting it included in the big budget compromise that passed the House last week and is clearing the U.S. Senate this week. That budget plan also cuts the cost-of-living increase in pension benefits for retired military veterans.

“There are better ways that we can try to address some of our budgetary needs than doing it on the back of the people who served with the promise that they were going to get guaranteed retirement benefits,” Braley said.

Braley said packaging that cost-of-living increase for military retirement benefits with the tax credit for businesses that hire veterans may be the best approach to quickly getting congressional approval of these two proposals in early 2014.