You are here: Home / News / Schweitzer, to Iowa liberals: “No more war for oil.” (AUDIO) 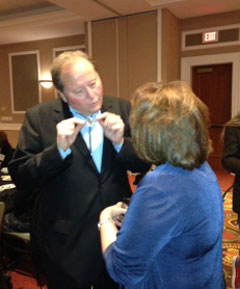 A Democrat who says he’s considering a run for the White House railed against America’s “longest war” and highlighted his eight-year record as a western state governor during a speech in Iowa tonight.

Former Montana Governor Brian Schweitzer mentioned working as an irrigation developer in the Middle East in the 1980s and he expressed concern about a looming conflict with Iran.

Iowa will hold the first voting in the next presidential race and Hillary Clinton is the perceived frontrunner for Democrats in 2016. Without mentioning her by name, Schweitzer took aim at a vote Clinton cast while she was in the U.S. Senate.

“When we were attacked at 9/11 by 17 Saudis and two Egyptians who called themselves al Qaida — who weren’t welcome in Iraq  — and George Bush got a bunch of Democrats to vote to go to that war, I was just shaking my head in Montana,” Schweitzer said.

Schweitzer, who did not use notes, spoke for about 35 minutes at a holiday party for the “Progress Iowa” group.

“No more war for oil,” he concluded.

Schweitzer then helped raise $725 for the “Progess Iowa” liberal advocacy group by auctioning off an autographed children’s book about his dog, plus the belt buckle he was wearing and the bolo tie he took off to start the bidding.

“I figured since I was coming to Iowa and, you know, you’re kind of big city people and stuff that I had to wear a tie and I don’t wear one of those curtains or whatever you wear and so I wear a little different tie,” Schweitzer said. “…Here’s what I’m going to do. I’m going to take this tie off of my neck and I’m going to auction it off right now to the highest bidder. So who’ll give me $50?”

Schweitzer’s bolo tie eventually sold for $125 — to Jack Hatch, a Democrat who’s running for governor of Iowa. Iowa Democratic Party chairman Scott Brennan, who was at tonight’s event but did not bid on any of the items, has heard Schweitzer speak three times.

“I think he’s a legitimate candidate if he wants to run. He’s got a story to tell,” Brennan said. “It’s just that running for president is a big, big lift.”

“I would hardly call Montana a bastion of liberals and yet they were able to do some things that could fundamentally make a difference for the people of that state,” Sagar said, “maybe become a model for what other states and his country could do.”

Schweitzer’s eight-year run as Montana’s governor ended this past January. Montana has term limits, so he could not seek reelection. Earlier this year Schweitzer ruled out running for Montana’s U.S. Senate seat in 2014.