You are here: Home / Fires/Accidents/Disasters / Ice makes things not so nice for travel 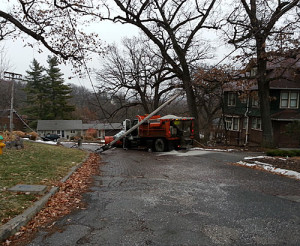 This Des Moines snowplow slid on the icy road into a power pole, knocking out power to the area.

Much of Iowa got a coating of ice overnight and motorists are finding even short commutes a challenge this  morning, with fender-benders causing snarls in many areas of the state.

In Cedar Rapids, public works maintenance manager Craig Hanson says they have up to 20 spreaders that have been dumping several hundred tons of salt since last night.

“We’ve treated the main arterials of the city twice,” Hanson says. “Some of those sections of roads have refrozen but in general, the main roads are mostly driveable and we have crews treating them for a third time.” While no fatal accidents are reported so far in this ice storm, communities across a wide section of Iowa are seeing significant traffic troubles due to slick streets.

Many school systems have cancelled class today or are operating on a two-hour delay. Hanson warns, if you have to go out, expect it to be very slow going. “Any residential road should be considered as ice-covered,” Hanson says. “The hills are extremely ice-covered and even small grades on hills are very treacherous for driving.”

Meteorologist Miles Schumacher, at the National Weather Service, says a Freezing Rain Advisory is posted for much of the state through noon, but another storm system is headed for Iowa that should arrive Saturday. Any snow that melted in the short-lived heat wave earlier this week will be replaced. “It looks like the heaviest band is going to be over the southeast third to quarter of the state,” Schumacher says. “We could see some substantial snowfall totals in those areas.”

Forecasters say parts of Iowa could have four-to-six inches of snow, or more, by Sunday. The approaching storm system will also leave behind bitter cold temperatures, he says, in addition to very strong winds. “It’ll be blowing pretty good out of the north for Sunday night into Monday and it looks like we’ll see wind chill values falling to 20 to 30-below-zero across a good part of the state,” Schumacher says. “Real cold push of air, one of the coldest ones so far this season. We’ll see high temperatures in the single digits and maybe even a few below-zero on Monday.”

Looking ahead, next Wednesday, Christmas Day should be dry with highs in the 20s.