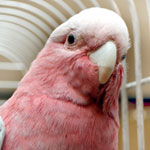 Loretta is one of 49 birds up for adoption.

The Animal Rescue League of Iowa hopes to soon wrap up part of the process of finding new owners for over four dozen birds discovered in the home of a Des Moines man who was killed by police earlier this month. Police found 55 birds, four cats and one snake inside the home of 38-year-old Steven Vogel, was shot and killed December sixth after he opened fired with a rifle in his southside Des Moines neighborhood.

The Animal Rescue League says Vogel’s relatives claimed six birds, but there are 49 left. Many of the birds are bonded pairs. The ARL has set up a webpage to take applications for the birds, with the deadline of seven o’clock tonight.

There is a $20 application fee and adoption fees range from $200 all the way up to $1,400 for some of the pairs. People adopting the birds must detail their past experience with birds and promise not to breed the birds.

The ARL says it will look over all applications and notify those who they select to take the birds.