You are here: Home / News / Johnny Orr’s personality made him a favorite with everyone (Audio) 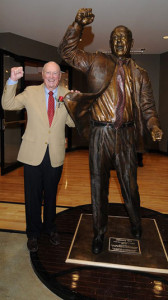 Johnny Orr with his statue in Hilton Coliseum.

Former Iowa State men’s basketball coach Johnny Orr died this morning at the age of 86. In 14 seasons Orr turned around the Cyclone program and took it to six NCAA tournaments, but he was liked as much for his coaching ability as he was his personality. Orr was always colorful in his comments after games, including these comments after a game in Ames with Kansas.

The coach’s raspy voice and the way he described things was often imitated.

The one thing Orr wouldn’t comment on in what turned out to be his last conference tournament coaching the Cyclones was the officials. He didn’t want to say anything at the time that would get a fine or get him suspended.

Orr did announce his retirement later in an emotional news conference in 1994 at Hilton Coliseum.

Orr was asked what led to his final decision to retire.

Orr stepped down from coaching for a one-year position in the athletic department.

Orr joked about how he went back and forth with then ISU athletic director Gene Smith in trying to decided if he would retire.

Audio: Orr on decision to retire :16

Johnny Orr is survived by his wife, Romie, and three daughters; Jennifer, Leslie, Rebecca, and five grandchildren and two great-grandchildren. His daughter, Robin died in 2010. Funeral arrangements are pending.