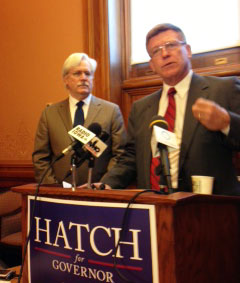 A Democrat who had been exploring the idea of running for governor has now endorsed a Democrat who is running.  Bob Krause announced late this morning that he’s backing Jack Hatch’s bid for the Democratic Party’s nomination for governor in 2014.

“I could see a victory in the primary,” Krause told reporters during a statehouse news conference. “I think that was starting to build and I was starting to get momentum, but then I looked at where either Jack or I would be when the June Primary was over and we would be basically depleted and exhausted and facing the $10 million man.”

Krause is urging any other Democrat thinking about running for governor to stay out of the primary so Hatch can start raising money for the general election campaign against five-term Republican Governor Terry Branstad.

Krause then announced he will run again for the U.S. Senate — in 2016 — hoping to be the Democrat who challenges Republican Senator Chuck Grassley’s bid for a seventh term.

“This is a full and not a tentative commitment to run for the United States Senate against the obstructionist in chief that is currently our senior senator,” Krause said today.  “…I’m not going to use age as an issue, but our good senator will have been in office for 40-plus years and that is well beyond any term limits that are advocated by the Tea Party or the Republican Party.”

Krause made a number of appearances at Democratic Party events over the last half of 2013 as a candidate exploring the idea of running for governor, but he never officially launched a campaign.  Hatch said he’s honored to have Krause’s endorsement.

“It’s the beginning of a coalition that we will be building across the state, a coalition that will bring together all parties that are dissatisfied with the sluggish, stagnant and failed leadership of Terry Branstad,” Hatch said during a statehouse news conference with Krause.

In December, Tyler Olson, another Democrat who had been running for governor, ended his campaign after announcing he and his wife were divorcing.  After Olson’s announcement a few other Democrats said they’re considering jumping in the race and challenging Hatch in the Democratic Primary.