You are here: Home / Health / Medicine / More boys than girls born at state’s largest hospitals in 2013 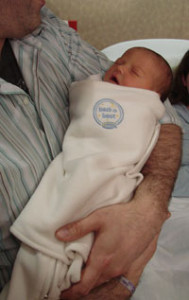 Two of the state’s largest hospitals are reporting that they delivered more baby boys than girls in 2013. Karen Vander Sanden is a spokesperson for Mercy Medical Center in Cedar Rapids, where 53-percent of the babies born were boys and 47-percent were girls.

Many of those newborns share the same first name. Vander Sanden says, of the babies born at Mercy, the most common name for girls was Harper, while Jackson was the top choice for boys in 2013. Several more nontraditional names were popular for parents of newborns. “In the girl department, we have Ella, Ava, Paisley, Grace and Reagan among the top names,” Vander Sanden said. “In the boy department, (favorite names) were Bentley, Greyson, Henry, Isaac and Ryker.”

Unity Point Health, which covers three hospitals in Des Moines, reports the most popular baby names were Noah, Ezra, Liam, Henry and Ava (in no particular order). The busiest day in 2013 for Methodist Hospital in Des Moines was February 5 — when 19 babies were born.

Unity Point doctors delivered 88 sets of twins and two sets of triplets. State health officials, back in August, released the list of the most popular names Iowans picked for their newborns in 2012. Liam topped the baby boys’ list while Emma was the number-one name for girls.