You are here: Home / Business / Iowa and Nebraska leaders team up for economic development agreement 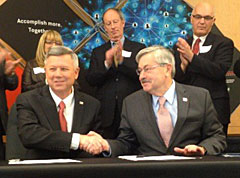 In what’s being called an unprecedented collaboration for regional economic development, an agreement was reached today  between southeast Nebraska and southwest Iowa. Iowa’s Governor Terry Branstad and Nebraska’s Governor Dave Heineman shook hands to seal the deal in forming the two-state organization that will promote Omaha, Council Bluffs and the surrounding area.

Branstad says, “Both Governor Heineman and I have made economic development the top priority in our states and we work hard in this every day, but when you can work together in a partnership like this, you can be even more effective.”

A similar agreement was reached on a smaller scale years ago, the governor says, between Sioux City, Iowa, and its neighbors, South Sioux City in Nebraska and North Sioux City, South Dakota. “This area, because of the concentration that’s available here in Omaha and the experience you’ve already had on the Nebraska side,” Branstad says, “we think partnering with you is just going to make us all stronger.”

The governor says there is a national trend toward building strong, mutually-beneficial regional economic development partnerships, adding, “This type of regional approach will give us more clout on the national scene,” while also bringing more jobs to the region. “On behalf of the state of Iowa, we fully support this two-state collaboration,” Branstad says. “We’re all too aware of how important economic development is and we are in global competition these days. State lines mean nothing to companies that are looking for the best place in the world to do business.”

The new partnership will focus its efforts on entrepreneurship and innovation, workforce development and attracting new business. “This partnership will provide greater opportunities for the entire geographic region to be successful,” Branstad says. “We’ve been successful. I think we can be even more successful.” The partnership is being funded by public and private investors throughout the region.

Pete Tulipana, president and CEO of the Iowa West Foundation, says several organizations are joining forces with the agreement. “We are now a multi-state, regional economic development organization,” Tulipana says. “Advance Southwest Iowa is a public-private partnership for the city of Council Bluffs, the Council Bluffs Chamber of Commerce, Iowa West Foundation, Pottawattamie County and the Western Iowa Development Association.”

Tulipana says the Iowa West Foundation has awarded a grant of $2.2 million over the next five years to support the work of economic development both through the Council Bluffs Chamber of Commerce and the new regional partnership.