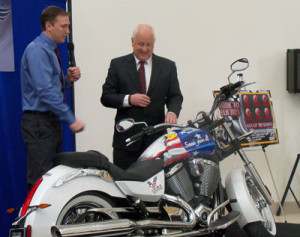 The Iowa artist known for painting patriotic pictures on a boulder in Adair County has painted a much smaller and more mobile object to help raise funds for veterans.

Iowa Lottery CEO  Terry Rich announced today a motorcycle built in Spirit Lake and painted by Ray “Bubba” Sorenson II will be raffled off in conjunction with a new Iowa Veterans Fund lottery  scratch ticket. “All the non-winning tickets can then be submitted for this special edition of the Victory motorcycle,” Rich says.

The special veterans scratch-off tickets were created in 2008 and just over $14-million from their sale has already gone into the Iowa Veterans Trust Fund. Rich says the tickets will still have their normal prizes, and if you can’t win one of them, you can have a second chance with the motorcycle. “You are able to go to www.iaLottery.com and actually register your ticket,” Rich explains.

The Iowa Lottery will then set up a drawing of all the tickets that have been registered to draw for the winner of the motorcycle.  Sorenson, who is from Greenfield,  has painted what’s known as “The Freedom Rock” for several years and says he wasn’t quite sure if he was the right artist for the motorcycle project. “I paint boulders and I’m a brush painter and I told them that this is going to be artwork that’s brush painted, there’s gonna be layers and you’re going to be able to see some of the brush strokes. And the more we talked about it, we thought that will make it unique,” Sorenson says. “This is my first time doing something like this. I think it turned out great and I hope you guys like it.” 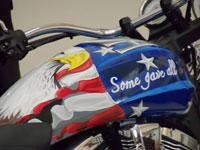 The gas tank of the motorcycle that will be raffeled off.

Sorenson kept with the patriotic theme on this project. “My favorite colors are red, white and blue. One of my favorite animals is the eagle and so you might be able see a couple of those things on this,” Sorenson says. He says once the initial sketches for the design were completed it only took five days to paint the motorcycle. “When I took on the project I was done with the Freedom Rock tour for the summer and I wanted to completely concentrate on it, so I kind of locked myself in my studio for five days and completed the artwork,” Sorenson says.

Sorenson currently has an effort underway to create a Freedom Rock in all of Iowa’s 99 counties, but he’s not sure he’ll do any more motorcycle painting. “I don’t know, I think I might just keep this one as the unique one in Iowa — I don’t know,” Sorenson says. “I had fun doing it, but I think my specialty is on boulders.” Sorenson worked with the Iowa Lottery in the past to created the Freedom Rock scratch off ticket.

The Iowa Lottery says the motorcycle is valued at  $31,000. The “Ride to Riches” tickets will be on sale through March 26, with the drawing for the motorcycle held sometime after that.