You are here: Home / News / Temperature could remain below freezing until Friday 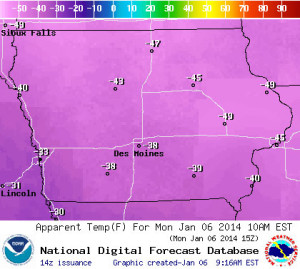 This morning’s temperatures in the teens-below-zero are expected to be the coldest in Iowa since February of 1996.

A Wind Chill Warning is posted statewide as wind chills are dipping from 25-to-55-degrees below zero. Highs today aren’t even expected to reach above zero.

Many Iowa schools have canceled classes so kids didn’t have to stand on frigid bus stops. While the young ones get to stay home, many adults have to head out into the cold to work, and Donavon reminds them to bundle up. “If you must travel, certainly have your winter survival kit, which includes plenty of clothing, numerous layers with loose-fitting, creating a lot of air pockets to help insulate,” Donavon says. “Also, high-energy foods. Certainly have your cell phone along.”

Other items for the kit: take a flashlight, a radio, batteries, candles, matches and a shovel. Donavon says travelers should also keep a full tank of gas in their cars in case they become stranded. That will also alleviate concerns of the gas lines freezing.

All 99 Iowa counties are under the Wind Chill Warning and he notes, Iowa is far from alone in its misery. “It’s probably the deepest and most expanded wind chill warning we’ve seen in quite some time,” Donavon says, “from eastern Montana, all the way through the Ohio valley and up into the New England region.” He says high temperatures in Iowa will remain cold all week, but Friday’s highs may reach close to normal in the mid-30s.