You are here: Home / Fires/Accidents/Disasters / Weather conditions tough for firefighters in western Iowa 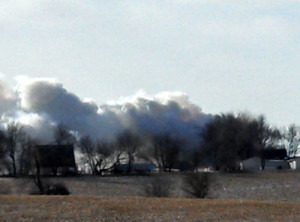 The extreme cold hampered efforts to extinguish a couple of fires in western Iowa. A space heater is blamed for a fire that destroyed a two-story home northeast of Atlantic this morning. No one was injured.

Cass County Emergency Management Director Mike Kennon says, in addition to the fire itself, firefighters had to battle mother nature. “They really faced a lot of adversity as far as the weather is concerned,” Kennon said. “It’s amazing how you can’t catch your breath and any exposed skin…it just burns.”

The temperature at the time of the blaze was nearly 15-degrees below zero, with a wind chill of around 30 below. Kennon said firefighters’ gloves become coated with ice and were unusable in a very short time.

The fire started just before 8 a.m. and quickly spread to the rest of the structure by the time firefighters arrived on scene. “The roof is collapsed and the east side of the house is collapsed,” Kennon said. Smoke from the fire could be seen several miles away.

Firefighters from Atlantic, Marne, Anita, and Wiota were all called to the scene. Meanwhile, firefighters from six area departments were sent to a log cabin fire on Sunday evening in a rural area of Guthrie County. Jeff Howard, director of operations for Stuart Rescue EMS, said no one was seriously injured but the sub-freezing temperatures took their toll on both personnel and equipment.

“You try to keep your pumps running and water circulating, but when it’s this cold, it’s just hard. Water lines freeze up, pumps freeze up. It’s hard on the firefighters,” Howard said. “Cold weather like this is just awful.” At the time firefighters left the scene, the temperature was 14-below zero. The cause of the fire is unknown.