You are here: Home / Crime / Courts / Parkersburg man shot by officer released from hospital then arrested 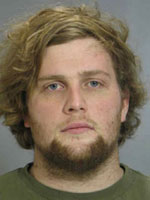 A Parkersburg man shot by a Cedar Falls police officer on Christmas Day was released from the hospital Monday and then promptly arrested. Twenty-seven year old Zachary Lee Church was arrested by DCI agents on warrants for assault of a peace officer and possession of marijuana with intent to deliver.

Cedar Falls officer Bob Anderson said he found Church asleep at the wheel of his car on a city street. Officer Anderson said Church knocked him down and started beating him as he tried to put him in the squad car. The officer said he feared he would lose consciousness and shot Church to protect himself.

Church has been in the hospital since that Christmas Day shooting and is now being held in the Black Hawk County Jail on a $45,000 bond. The DCI said in a news release that the investigation into the use of lethal force by officer Anderson is still ongoing and the results of that investigation will be forwarded to the Black Hawk County Attorney’s Office for their review.

Photo courtesy of the DCI.