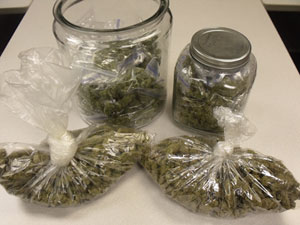 Mark Prosser, Public Safety Director for Storm Lake Police, says the 18 people were arrested between Friday and Sunday.  “Charges range from the delivery of cocaine and methamphetamine to conspiracy to manufacture meth, delivery of mushrooms, marijuana…as well as possession with intent to deliver those types of illegal drugs,” Prosser said.

The investigations spanned a nine month period and also involved heroin and prescription pills. “Over the last few years, we’ve seen a wider variety of drugs coming from large urban centers from around the country coming into our region and into our community,” Prosser said.

As part of the enforcement operation, Storm Lake Police executed a search warrant at a home Friday morning and seized over two pounds of marijuana packaged for sale. The pot carries a street value of $12,500. Also seized at the residence was cash, drug paraphernalia and a vehicle allegedly used in the transportation of the illegal drugs.