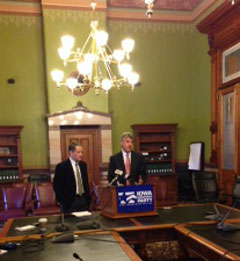 The chairman of the Iowa Democratic Party is traveling the state today, urging activists to attend next Tuesday’s precinct caucuses. During a news conference at the statehouse in Des Moines, Scott Brennan compared the Caucuses to town-hall meetings.

“It’s about folks coming together, friends and neighbors from all different backgrounds, to fight for the values that are important for our communities and moving Iowa forward,” Brennan said.

The Iowa Democratic Party and the Republican Party of Iowa both will hold precinct-level meetings throughout the state on Tuesday night, January 21, however some precincts are merging since turn-out in a non-presidential election year is lower.

Both parties intend to start their precinct meetings at 7 p.m.  You must be a registered Republican or Democrat to participate in the party caucuses, however you can change your party affiliation on Caucus night. Seventeen-year-olds can participate if they will turn 18 by Election Day in November.

“We all know how important the caucuses are to our communities, our state and our nation,” Brennan said.

The Iowa Democratic Party has launched a website where you can find out where your precinct caucus will be held. Find a link at www.radioiowa.com. Brennan will hold a news conference in Waterloo just after noon and in Cedar Rapids at 2:30 p.m.