After a recent review of DNA evidence, a man who was put to death in MIssouri for the 1987 murder of an Ottumwa woman has been identified as the person who beat three other people to death in southeast Iowa in 1984.

During a news conference this afternoon in Ottumwa, Special DCI Agent Mike Motsinger identified Andrew Six as the person behind the murders.

“The evidence suggests or points to one person and that’s Mr. Six,” Motsinger said. “…We know for sure

that he is responsible for Tina Lade and Sara Link’s murders.”

The evidence was recovered from DNA found inside the jeans of murder victim Tina Lade. Wapello County’s sheriff said surviving family members are happy the case has been brought to closure. Investigators tried to determine

the connection between Six — the murderer — and the three who were beaten to death.

“The only motive at this time that we’ve been able to determine through the investigation is the possible deal that they had with some type of car deal,” Motsinger said. 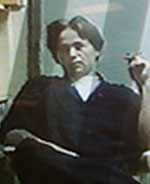 On Friday, April 13, 1984, authorities found the body of 21-year-old Justin Hook, Jr., near his burned out mobile home, a couple of miles outside the town of Drakesville. When they went to tell his 41-year-old mother, Sarah Link, in Farmington, they couldn’t find her.

Her body, along with the body of Hook’s 19-year-old fiancé, Tina Lade of Ottumwa, were found a few days later near Eldon. Six was questioned at the time, but not arrested for the three murders.

In 1987, Six was arrested along with Donald Petary for the abduction and murder of 12-year-old Kathy Allen of Ottumwa. Allen’s body was found in Missouri. Six was put on death row in Missouri for that crime and executed in August of 1997.