You are here: Home / Sports / Ferentz issues statement on death of Norm Parker 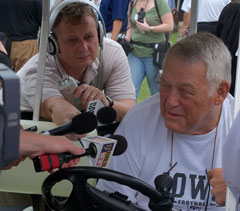 Norm Parker talks with the media in August of 2011.

The University of Iowa confirmed that retired Hawkeye defensive coordinator Norm Parker died today at University Hospitals in Iowa City. Parker was a native of Hazel Park, Michigan who came to Iowa with head coach Kirk Ferentz in 1999 and retired at the end of the 2011 season.

Ferentz released a statement saying: “Norm played a major and key role in any on the field success we experienced during his 13 years as our defensive coordinator. More important and valuable, is the strong and positive impact that he had on our players, staff, support staff and fans – everyone he interfaced with during his 15 years in Iowa. Norm was an excellent football coach. Beyond that, he was a tremendous spouse, father and cherished friend to many.”

Parker was 72 and is survived by his wife Linda, four children and six grandchildren. Parker was preceded in death by his first wife, Ginger, and son, Jeffrey. Funeral arrangements are pending in Michigan. There will be a memorial service in Iowa City at a later date.

Hawkeye athletic director Gary Barta released this statement:  “Norm Parker was one of my all-time favorite people and coaches. “He was a brilliant defensive coordinator, and his players loved him. He knew how to win football games, but more importantly, he knew how to make you feel good and to laugh. He will truly be missed.” 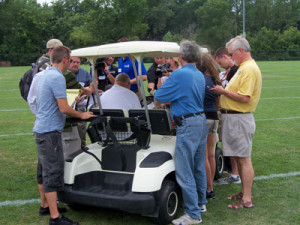 Norm Parker surrounded by reporters at the 2011 media day.

Parker began coaching on the collegiate level at Eastern Michigan in 1968 after beginning his coaching career in the high school ranks for three seasons. He also coached at Wake Forest, Minnesota, Illinois, East Carolina, Michigan State and Vanderbilt.