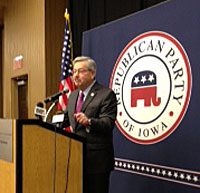 “Unify” was the word of the morning for Republicans who gathered for a breakfast-time pep rally three hours before the 2014 Iowa legislative session gets underway.

The Iowa GOP official who gave the opening prayer asked Republicans to put aside their “minor differences” and unite for the fall election. In a further sign of singular purpose, Governor Branstad’s reelection campaign and The Family Leader, a Christian conservative group, that haven’t always agreed on issues, were the co-sponsors of the event.  Branstad spoke for a dozen minutes and opened his remarks with the unity theme.

“I believe that 2014 is a year of great opportunity, but it isn’t going to happen unless we work extraordinarily hard and that we work together and that we unite behind the Republicans who are successful in winning the nomination of our party,” Branstad said.

The governor also cautioned Republicans in primary battles to avoid engaging in a “family feud” and to present voters with a “focused” and “positive” message. Iowa GOP chairman A.J. Spiker has quarreled with Branstad a few times in the past three years, but Spiker carried the same unity message. Spiker urged the elected officials and legislators in the room to “seize the opportunity” to make 2014 a watershed election year for Iowa Republicans.

“If you look at what Governor Branstad and all of you have done here Iowa and compare the state of Iowa and what we have done to what the federal government has done under Barack Obama, it’s a night and day difference,” Spiker said.

Republican leaders in the Iowa House and Senate also spoke at the event. House Speaker Kraig Paulsen of Hiawatha mentioned what he called the “team effort” from the governor, other statewide elected officials and legislators who helped a central Iowa Republican won a House seat by 40 percent margin last week.

“It was another great opportunity to show that Republicans are ready to work together to make good things happen,” Paulsen said.

Senate Republican Leader Bill Dix of Shell Rock is hoping to organize victories in November that will help Republicans gain majority control of the senate.

“It’s going to be a good year for us,” Dix said. “There is excitement and enthusiasm out all across Iowa.”

Democrats held a private fundraiser Sunday night, just before the 2014 Iowa legislative session begins. Both the House and Senate are scheduled to start at 10 a.m.