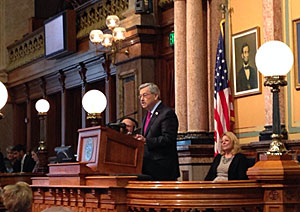 Governor Branstad delivers his Condition of the State message.

Governor Terry Branstad is proposing a tax break he hopes will lure more retired soldiers to settle in Iowa.

Branstad discussed the outline of his “Home Base Iowa” initiative during his “Condition of the State” message to lawmakers. A copy of the address was released at 10 a.m. this morning, just as Branstad began speaking. A key part of the plan would exempt military pensions from state income tax, just like Wisconsin, Illinois, Missouri, Kansas and South Dakota do.

“In Iowa, we honor our veterans — not only with words and ceremonies, but with action,” Branstad said.

Veterans drawing a military pension who already live in Iowa would save 10-million dollars, according to the governor’s staff. Branstad’s also calling on state licensing boards to redraft rules and give credit for military training and experience when issuing licenses.  As for other ideas, Branstad is proposing that companies which extend broadband service to new or under-served areas get a tax break — no property tax charges on the new equipment for five years.

“Through technology, we can connect our dreams to reality,” Branstad said.  “….Technology connects the entrepreneur without a dime in her pocket to the billion dollar idea in her dreams.”

Branstad suggests tripling state funding for apprentice programs and giving schools more authority to police bullying that goes on outside of school hours and off of school grounds.

“Sadly, for some children in Iowa, the bully they face makes every day seem like a nightmare,” Branstad said.

This was Branstad’s 19th “Condition of the State” speech and the general theme for this year’s address was Iowa is working.

“I am proud of what we have been able to accomplish working together,” Branstad said. “…However, there is still much more work to be done. Together, let’s make this another successful and productive session.”