You are here: Home / News / U-I employee to appear on Jeopardy 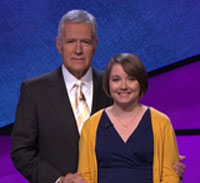 A University of Iowa employee will appear on today’s  episode of the popular game show Jeopardy. Sarah McNitt was a contestant on a show that was taped back in November.

Since then, she has not been allowed to discuss the outcome the show that finally airs today at 4 p.m. (CST). “It’s very hard to keep everything a secret,” McNitt said. “My husband, my father, my sister, and my in-laws went out to California with me. So, we’ve at least been able to talk among ourselves about the Jeopardy experience.”

The Michigan native tried for several years to land a spot on the game show and was invited to an audition in 2009. McNitt did not get another call at that time, but landed another audition last summer. That audition took place the day after she was married. A short time later, she was invited to Culver City, California to compete on Jeopardy.

McNitt said she and the other contestants took part in “practice” games on the Jeopardy set on the morning of the show’s taping. “That helps a little bit with nerves. I wasn’t very nervous until I walked out on the stage to play the actual game…but, once the game started, I just focused on the game,” McNitt said.

The taping of the show, in November, happened about one month after Sarah’s mother died – following a battle with Leukemia. Sarah said she’ll use “what little celebrity status” she gains from Jeopardy to encourage people to become blood donors and sign up for the bone marrow registry. For the Jeopardy episode airing today, McNitt wore a necklace that belonged to her mother.

McNitt, who is a study abroad adviser for International Programs at the University of Iowa, has blogged about her Jeopardy experience.