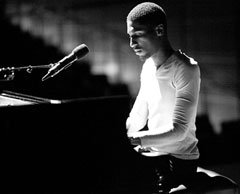 A New York musician with New Orleans roots is bringing his band to Iowa for the first time this week, offering what he says is a unique musical style never before heard in the heartland. Jon Batiste says the songs he creates with Stay Human defy genre and span generations, as they contain elements of jazz, funk, spiritual, hip-hop, classical music and much more.

The 26-year-old refers to the sound as “social” music. “You just have to surround yourself with great musicians who have great spirit and energy,” Batiste says. “The soul that they have is very important and the chemistry between all of the different people in the band and also, just creating music that’s from that place.”

When he performs, Batiste says he’s trying to “fill a need” for the listener, saying, his ambition is nothing less than to transform their lives. Batiste says, “You can have all the talent in the world and all the technique in the world but when you have the mastery of intent, you can really learn how to articulate your points in the music, deeper and deeper.”

As testament to his lack of a single musical genre, Batiste has collaborated with a diverse array of musicians, recording with a list that includes Prince, Cassandra Wilson, Lauryn Hill, Wynton Marsalis, Jimmy Buffet and Lenny Kravitz. “It’s more about the music bringing people together and the idea of playing different genres of music in one musical statement,” Batiste says. “That’s powerful to me. You can have different people who like different genres and they come together through the music and the experience because there’s something in it for them.”

Batiste was born in New Orleans into a family whose deep musical heritage is part of the inspiration for the HBO series “Treme,” in which he has appeared. One of the show’s characters, Delmond Lambreaux (lam-BROH), is based on Batiste. Batiste graduated from the Juilliard School in New York, earning a master’s degree in jazz and classical piano. He says he loves hopping on the subway with his bandmates to put on impromptu concerts for commuters. “You’re bringing it to them and you’re giving them an experience with it and that lasts them a lifetime, something they didn’t expect to see or hear,” Batiste says. “It changes their day and it makes them feel good and it makes them want to tell their friends and their family.”

Batiste often lectures, gives master classes, and serves as Artistic Director At Large of the National Jazz Museum in Harlem. The band’s a quartet, with Batiste on piano, vocals and the melodica — a wind piano that’s blown like a horn while played like a piano. It sounds something like a harmonica or accordion. He calls it a “harmon-a-board.” The other three bandmates play: tuba, alto saxophone and the drums.

They’re playing Thursday night in Iowa City at the Englert Theater and Sunday night at the Temple for Performing Arts in Des Moines. Learn more at: www.jonbatiste.com