You are here: Home / News / Congressional candidate Cramer says he is a ‘full spectrum conservative’ 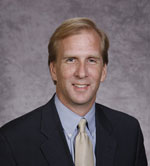 Central Iowa businessman Robert Cramer is the latest Republican to enter the race for Iowa’s third district congressional seat. “It’s got to a point of enough is enough. I’ve watched Washington, D.C. just be dysfunctional and instead of complaining about, I decided it’s time to step up and do my part,” Cramer said.

The Johnston resident plans to hold a formal campaign kickoff event soon. Cramer describes himself as a “Washington outsider” and a “full spectrum conservative” candidate. “To me, conservative means we have a fiscal responsibility…to get the federal government spending within its means and start balancing the budget to get our economy rolling again. It means less government, rather than more. And it means preserving our traditional values,” Cramer said.

Governor Branstad nominated Cramer for a seat on the Iowa Board of Regents last year, but the Democrat-led Iowa Senate rejected the nomination. Cramer, has served on  the board of the Christian conservative group The Family Leader, joins several other Republican candidates who’ve announced they’re running in the district. They include Iowa Secretary of State Matt Schultz; David Young, a former aide for Senator Chuck Grassley; Iowa Renewable Fuels Association Executive Director Monte Shaw; and Joe Grananette, a P.E. teacher in Des Moines.