You are here: Home / Fires/Accidents/Disasters / Several injured in explosion at Omaha plant 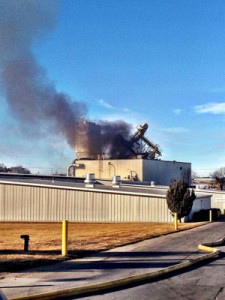 Omaha Police took this photo of the plant where the explosion happened.

An explosion and partial building collapse this morning at an Omaha animal feed processing plant sent at least 10 people to the hospital. Interim Omaha Fire Chief Bernie Kanger said 38 employees were inside the International Nutrition plant when the explosion occurred around 10 a.m. “We do have some individuals who are unaccounted for,” Kanger said.

There is significant structural damage inside, so Kanger said firefighters are very carefully searching the structure in fear that more debris could fall. Stacey Stout’s father is a shift supervisor at International Nutrition.

He phoned Stout’s mother to report he’s fine, but several good friends are missing. “He just said he’s O.K., but Dave and Keith are still missing and he was trying to find them,” Stout said. “He was crying…I just want to see my dad and Dave is like family to us, so it’s definitely hard.”

Kari Cook’s fiancé works inside International Nutrition and she received a text message from him shortly after the explosion.  “He sent it to me at 10:09 this morning and it said ‘major accident, I’m hurt and trapped, love you,'” Cook said. Kanger said a firefighter was among the people injured. He declined to comment on possible fatalities.

Reporting by Karla James in Omaha