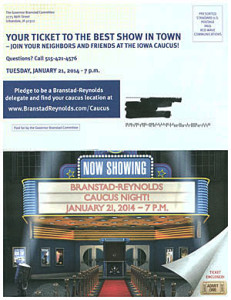 Mailer sent by the governor encouraging Iowans to caucus.

Tonight the state’s two major political parties will be holding precinct caucuses, a sort of kick-off for the 2014 political season.

This year’s Iowa Caucuses feature a bit of drama, on several levels. First, the people who attend these precinct caucuses will eventually be the delegates at district or state conventions where party nominees may be chosen.

“Everybody is aware that the choices that they make during the precinct caucuses could affect the eventual nominations of the U.S. Senate and perhaps even the U.S. House candidate,” says Eric Rosenthal of Cedar Rapids, the Linn County GOP’s Caucus organizer.

With crowded primaries in Iowa’s first and third congressional districts, as well as six candidates vying for the Iowa GOP’s U.S. Senate nomination, precinct caucus participants may eventually wind up as delegates at the conventions where the party nominees are chosen. Senate Republican Leader Bill Dix of Shell Rock says some campaigns are tracking or actually recruiting people to attend the caucuses, hoping they’ll later be a convention delegate.

“Campaigns who may have an interest in that strategy, this allows them that opportunity to pursue that,” Dix says. 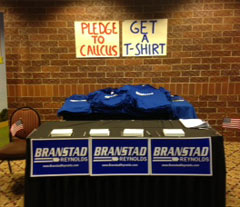 Incentives offered for those who sign up to caucus.

Iowa law stipulates the winner of a primary must secure 35 percent of the vote, or the party’s nominee is chosen at either a district convention or, in the case of that U.S. senate race, at their party’s state convention.

“Obviously, once you get three or more candidates in a race, the likelihood of that becoming a reality increases dramatically,” Senate President Pam Jochum, a Democrat who is from Dubuque, in the first congressional district where five Democrats are running in the primary.

There’s also a fight for control of the Republican Party’s top leadership posts and it starts with tonight’s caucuses. The Iowa GOP’s chairman and other top party jobs are currently held by leaders in the so-called Liberty movement that grew out of Ron Paul’s presidential campaigns. Other factions in the party are now vying to regain those footholds, but the only way to do it is to get caucus participants elected to county conventions, then the district conventions and ultimately the state convention.

Republican Governor Terry Branstad’s campaign has been encouraging his supporters to show up tonight. In addition to handing blue t-shirts to people at Branstad campaign events who pledge to caucus, Branstad’s campaign sent tens of thousands of Iowans a flashy pamphlet featuring Branstad as a sort of cartoon superhero, along with punch-out tickets for Caucus Night that look like theater tickets. Mike Mahaffey of Montezuma, the Iowa Republican Party’s chairman from 1987 to 1989, says despite efforts to spur turn-out, tonight’s weather may sway some to stay away.

“We’re looking at the deep freeze again,” Mahaffey says. “…By Caucus time it’s going to be very cold and in an off-year you wonder how that affects turnout.”

The Iowa Democratic Party’s current chairman went on a speaking tour earlier this month, urging Democrats to turn out for the Caucuses as a tune-up for this fall’s campaign.

Senate Democratic Leader Mike Gronstal of Council Bluffs says the caucuses help both parties “rebuild themselves” from the ground up every two years.

“We’re encouraging people to attend their precinct caucuses and do their civic duty,” Gronstal says.

House Democratic Leader Mark Smith of Marshalltown says the precinct caucuses are often the largest gatherings a legislator will encounter in his or her district during the wintertime, so activity at the statehouse will be suspended so legislators can attend the caucuses.

“This very unique process that we have in Iowa with the caucuses starting and then continuing on with the county is very important to the democratic process,” Smith says. “Our members should be there.”

Many of these meetings will be held in schools and, because there’s lower turn-out in a non-election year, a few counties have several precincts meeting in a single location. In Linn County, for example, Republicans from all the county’s precincts will gather at the convention center in downtown Cedar Rapids. Rosenthal, the Linn County Caucus organizer, is urging people to get there long before the caucuses start at 7 p.m.

“No matter where you are in the state, get to your caucus sites early and help out and participate because that’s what the nature of the caucuses are,” Rosenthal says.