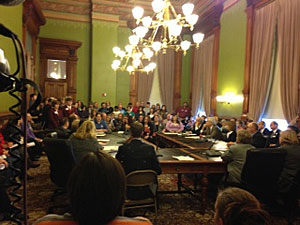 Juvenile home hearing at the capitol.

Laid off employees and former residents of the Iowa Juvenile Home in Toledo appeared before a state senate committee late this afternoon, pleading with legislators to override the governor’s decision to close the home.

Amber Opdahl — who is a wife, a mother and a nurse today —  credited the home’s staff with turning her life around.

“My family isn’t like most of yours. I’m sure most of you learned to love around a kitchen table with parents that adored you. My family is the staff at the Iowa Juvenile Home,” Opdahl said. “My loving, stable home is I.J.H.”

Months ago the group Disability Rights Iowa raised concerns about long-term isolation for some of the home’s teenage girls and those complaints set in motion a series of events that led to the home’s closure last week.  Seventeen-year-old Chelsea Reasoner, who spent three years in the home, told lawmakers she “100 percent deserved” isolation because of her “self-destructive behavior.”

“I was a kid that was going nowhere fast and was one of the most hard-to-reach kids. I was just stuck places by DHS because I was hard to deal with,” Reasoner said. “I went from that kid to the success story I am today. I’m starting college in the fall, I work full time and I’m a productive member of society — and it’s all because of these amazing people who cared about the direction my life went and helped me see my potential.”

Three members of the Iowa Juvenile Home’s staff told lawmakers they’re concerned about the teens who were transferred out of the home during its last weeks of operation. Todd Sprague worked at the Juvenile Home from 2005 ’til it closed January 15.

According to Jamie Koster, a teacher at the home for about eight years, a resident who was sent back to their home is now a runaway.

“Our secretary at the school almost on a daily basis was receiving calls from placements where our kids had gone saying, ‘We don’t know to handle these kids. Can you give us advice on how to deal with them?'” Keller said, “because they were engaging in self-harm, they were ingesting items and they didn’t know how to deal with that circumstance.”

Senator Joe Bolkcom, a Democrat from Iowa City, told the packed crowd of advocates for the Juvenile Home the governor’s decision to close the facility was “quite irresponsible,” but he added this cautionary note: “I don’t know if this legislature has the nerve, because we need to work together members, to reopen this question about whether or not we’re going to reconstitute some Iowa Juvenile Home.”

Senator Bill Dotzler, a Democrat from Waterloo, suggested by keeping the State Training School in Eldora for male teens open, Branstad has opened himself to a constitutional challenge.

“I think. as legislators, we ought to stand up for women on an equal basis. We need to reopen the Juvenile Home for women,” Dotzler said, to applause.

Bob Skow of the Iowa Juvenile Home Foundation, a charity, also testified at today’s committee meeting. Skow accused the governor of failing the teenagers from the home or who would have been sent there if it were still open because teens are now being sent to out-of-state facilities, shifted into mental health treatment, sent back to their “dysfunctional” homes or placed in juvenile detention facilities.

“Is that in any sense what you could consider to be what is best for the children in Iowa?” Skow asked.

Jim Roan, a lawyer who’s lived in Toledo since 1958, said the governor’s own task force said the state “has a responsibility” to provide a secure facility like the one in Toledo for troubled teenage girls.

Ninety-three people were employed at the home. The president of the union that represented those employees and four legislators have filed a lawsuit, challenging Branstad’s decision to close the facility.

AUDIO of part I of hearing: testimony of former residents