You are here: Home / Crime / Courts / Parents of murdered girl and kidnap victim who survived testify at capitol (AUDIO) 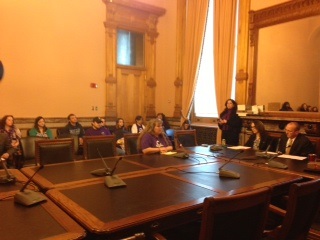 The parents of a north central Iowa girl who was kidnapped and killed last May were at the statehouse this morning, making the case for a new Iowa law that would no longer allow convicted sex offenders to be released early from prison if their crime was against a child 15 or younger.  Michael Shepard, the father of 15-year-old Kathlynn, testified briefly before a House subcommittee.

“I just want to leave you with the last words she said,” Shepard said, his voice choked with emotion, “when she told Desi that: ‘We didn’t deserve this.'”

Dezi is Dezirea Hughes, the 12-year-old girl who escaped after being kidnapped along with Kathlynn. She also testified.

“I’ve gone through some stuff that I don’t think anybody should ever have to go through,” Hughes told a panel of three legislators. “The kind of kidnapping that I had to go through scarred me through life.”

Authorities say Michael Klunder of Stratford kidnapped the girls. In 1992 Klunder was sentenced to 41 years in prison on a kidnapping charge, but he was released after serving a little less than half that term because he got time off for good behavior behind bars. Hughes told legislators it wasn’t just her that remains traumatized by the kidnapping, but her family suffers as well.

“Every sex offender that doesn’t stay locked up gets out and is going to do that to more families,” Hughes said. “It’s not fair to anyone, so please don’t make anyone go through what me and my friend and the Shepards had to go through, but if we can get this law passed, you have no idea how many lives you can save or how many families you can save from going through this.”

“(Klunder) confronted our youngest daughter before he even came up across Kathlynn and Desi, so he was out prowling for days, if not longer and now I have my 13-year-old daughter that says that it should have been her because she was seen first,” Denise Shepard said.

The Shepards would prefer life in prison without parole for sex offenders who prey on children on their very first conviction, but they support the legislation that’s advancing in the Iowa House.

“I think that if this law is…passed, with no time off for good behavior thrown out the window completely, I think that will keep these monsters in prison for longer and maybe make them think,” Shepard said. “And if we are able to keep at least one in prison for the full amount of time, who knows how many children we could save.”

“No time off for good behavior — to me that’s something that you would give a child for doing something right,” she said, “not to a criminal that’s spending time in prison.”

The bill has been approved by a House subcommittee and is ready for debate in the full House Judiciary Committee. Similar legislation has been introduced in the Iowa Senate and the Shepards say they’ll be back at the statehouse as the bill advances through the legislative process to press for passage. The Shepards, along with friends and relatives who made the trip to Des Moines today wore purple shirts, as purple was Kathlynn’s favorite color.