You are here: Home / News / American Idiot musical based on Green Day album stops in Iowa 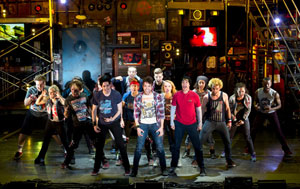 A top-selling concept album from a pop-punk band is now a Broadway rock musical that makes two stops in Iowa this weekend. “American Idiot” centers on three young men, living in suburbia, trying to make sense of a world that’s often senseless.

Twenty-three-year-old cast member Liam Fennecken says you don’t need to be fan of the band Green Day to enjoy the show. “Both of my parents are very, very conservative,” Fennecken says. “They are not fans of punk music or anything out of the ordinary and they absolutely loved the show.”

The production arrives in Iowa on the heels of this week’s Democratic and Republican precinct caucuses. While politics are a prominent theme in the plot, Fennecken — who graduated from Penn State last year — says no one in Des Moines or Cedar Rapids should be surprised or offended by the rock opera’s stances.

“It’s a lot of how Green Day felt when they wrote the album, ‘American Idiot,'” Fennecken says. “Billy Joe (Armstrong) had his political views at the time of what was going on after Nine Eleven and the state of how the media was presenting everything and just how the country felt.”

Green Day first hit it big in 1994 with the album “Dookie,” which featured songs about subjects ranging from anxiety and boredom to panic attacks and mass murder. Some longtime fans call this musical a sure sign the 90s punk rockers have sold out to the corporate world they once so despised in song. Fennecken disagrees. “Green Day has always stuck to their roots,” Fennecken says. “Even as they got bigger and bigger, they still just did what they really cared about and obviously, in the beginning, it was just kind of punk and anti-establishment and most of ‘American Idiot,’ the album, still holds true to that kind of mindset.”

The album, “American Idiot,” was released in 2004 and sold more than six-million copies, achieving global success, charting in 27 countries and peaking at #1 in 19 of them, including the U.S.and the UK. The album contained five successful singles, all of which are in the musical’s soundtrack.

The show goes on at the Des Moines Civic Center tonight and Saturday, and at the Paramount Theatre in Cedar Rapids on Sunday.