You are here: Home / News / “Ready for Hillary” event in Iowa tomorrow 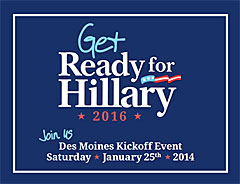 Key Iowa Democrats who backed Barack Obama and Hillary Clinton in  presidential contests of the past are meeting tomorrow to talk about the future.

Jerry Crawford, a Des Moines lawyer who has worked on six presidential campaigns — from Walter Mondale’s in 1984 to Hillary Clinton’s in 2008, is co-hosting what’s been billed as the “Get Ready for Hillary” kickoff event in Des Moines.

“The goal is to have some intimately sized conversations where people can provide their input and thoughts and advice on how to go about doing this,” Crawford told Radio Iowa. “And then there’ll be more activities as the calendar moves forward.”

The woman who managed Obama’s 2008 Iowa Caucus campaign and the woman who was at the helm of Clinton’s 2008 Iowa Caucus effort will both be there to talk about 2016. Craig Smith — a senior advisor to the “Ready for Hillary” organization who was White House political director for President Bill Clinton — is flying to Iowa for the event, too.

“Just to make sure that Hillary, as she’s making this decision — whatever she’s going to make, knows that there are people out there in Iowa that are really willing to be helpful if she decides she wants to run,” said Smith, who spoke by phone with Radio Iowa during a layover in Chicago’s O’Hare airport.

The “Ready for Hillary” Super-PAC formed a year ago as a draft movement to encourage Clinton to run in 2016. Smith said the focus Saturday will be on “infrastructure” and “data” — identifying people who are supporting Clinton or who might be inclined to do so.

“There’s a whole lot of people in this country, you know, that you’ve got to sort out and it just doesn’t happen overnight,” Smith said. “The need to start early is becoming more and more important than it ever used to be in the past, especially in a country where we live now that is so divided. The campaigns now are not decided in huge sweeps. They’re decided on the margins with handfuls of people here and handfuls of people there. Trying to figure out who those handfuls of people are takes a lot of time.”

Crawford stressed that getting started now will help Clinton be ready “when the contest” begins.

“The fact that Iowa has never elected a woman as governor or a member of congress – people aren’t blind to that,” Crawford said, “and it makes it more likely that she’ll have an opponent.”