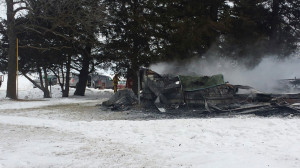 Fire destroyed this home and killed 5 people in Fayette County.

Authorities have confirmed five people were killed in a house fire early this morning in northeast Iowa.

Ron Humphrey is with the State Fire Marshal’s office. “We believe we’re looking at three adults and two kids,” Humphrey said. “We have to wait for positive I-Ds from the state medical examiner.”

KCRG-TV has reported a friend of one of the victims said a woman and her two children, ages 1 and 4, were among those killed. The home, near the town of Arlington, was destroyed. Five bodies were recovered from the charred rubble.

Humphrey said investigators have a “pretty good idea” who was in the home, but names won’t be released until the bodies are positively 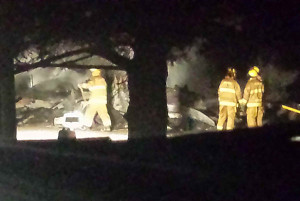 Firefighters on the scene of fatal fire near Arlington.

identified by the state medical examiner.

The Fayette County Sheriff’s office, in a news release, reported firefighters were sent to the home at 3:35 a.m. and when crews arrived, the house was fully engulfed.

There’s no determination yet what may’ve sparked the fire “Today was kind of a recovery mission,” Humphrey said. “There was total destruction of the home. There wasn’t much left of it, so it might be one of those that we may never know exactly what happened.”