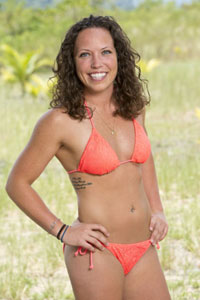 An eastern Iowa cop will be a contestant on the upcoming season of the popular reality TV game show “Survivor.” Twenty-nine-year-old Sarah Lacina is a police officer in Cedar Rapids. “I’m a huge fan of the show. It’s an awesome concept and I get to be part of it,” Lacina said.

Contestants are not allowed to speak publicly about “Survivor,” but short videos about each of this year’s “castaways” were released on CBS.com. Lacina will be one of 18 people competing for a $1 million prize in the Cagayan province of the Philippines.

The Wartburg College graduate said she’s been involved in sports her entire life. “I would say one of my downfalls is my competitiveness,” Lacina said. “It sometimes is overwhelming and, you know, I just can’t shut it off sometimes.”

The castaways will be split into three tribes: Brawn, Beauty, and Brains. Lacina will be part of the Brawn Tribe. The show uses a system of progressive elimination, allowing the contestants to vote off other tribe members until only one final contestant remains and wins the title of “Sole Survivor.”

In her video, Lacina said she believes she has a good shot at winning $1 million. “I think, physically, I definitely will be one of the stronger females and probably even stronger than some of the males,” Lacina said.

“Survivor: Cagayan” premieres on February 26 with a two-hour special on CBS. In 2008, a Charles City woman finished as a runner-up on “Survivor: Gabon.” Susie Smith won a consolation prize of $100,000.