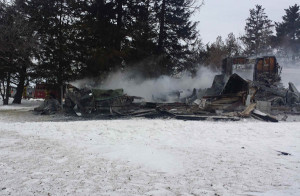 The Fayette County Sheriff says at least 5 people died in this house fire near Arlington.

The cause of a house fire that killed five people in northeast Iowa last Friday remains under investigation. The victim’s names have not been released, but they’re identified as three adults and two children. The fire happened  just southwest of Arlington in Fayette County.

A fund drive for the family has been established at Grandview Health Care Center in Oelwein. Grandview administrator Craig Allen says the drive was put together by a couple of the center’s employees.  “A couple of the family members have been longterm co-workers with us and we want to try and help them in their pain and suffering in some small way,” Allen said. “We started a donation collection for them.”

Ron Humphrey, with the State Fire Marshal’s office, said on Friday that the damage to the home is so bad that the cause of the fire may never be known.