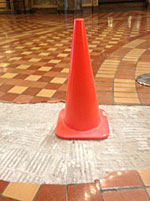 Orange cone warns of buckled tile at the capitol.

An area on the historic state capitol’s first floor is blocked off with orange cones after tile in that area buckled late last week.

“I got a call and somebody said some of the tile came loose and it look like it could be a tripping hazard,” said Mark Willemssen, facilities manager for the Iowa legislature.

The loose tile in a  10-foot by two-foot section of the capitol’s first floor rotunda was immediately removed and an architect was brought in to conduct an evaluation.

“The substrate is good and the structure looks good,” Willemssen says.

The state capitol was completed in 1886, but the tens of thousands of tiles on the first floor were replaced in 1956.

“From what I understand, a lot of the old tile started popping up at various places,” Willemssen says. “Apparently they started fixing it and after while it was more to fix it all than it was to replace it, so they replaced it.”

A view from above and ground level of the tile problem at the capitol.

Things aren’t that dire this time, according to Willemssen. There’s a small pile of unused tiles left over from that 1956 fix-up project, but Willemssen says the tiles that were removed last week will be reused.

The tiles that buckled are in the middle of the statehouse, far from any of the exits, so officials do not believe the cold weather caused the problem.