You are here: Home / Health / Medicine / Controversy over bill to ban sale of e-cigarettes to minors 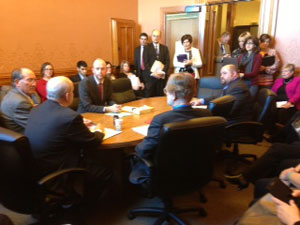 A bill to ban the sale of electronic cigarettes to minors has begun making its way through the Iowa legislature. However, public health advocates warn the bill is written so that e-cigarettes may not be subject to state tobacco taxes and smoking an e-cigarette in a public place may not violate the Iowa Smoke-Free Air Act.

“Not including electronic smoking devices in the definition of tobacco products sets the stage for these products to be treated differently than other tobacco products here in Iowa,” says Jeneane Moody, executive director of the Iowa Public Health Association. “And IPHA opposes attempts to change laws for e-cigarettes that could in the short or the long-term undermine existing effective tobacco control here in Iowa.”

“The creation of new categories of products sets the stage for treating some tobacco products differently than others, which we oppose,” Schulte says. “The bill is consistent with language we have seen introduced by tobacco companies in several other states.”

Stacy Freelund of the American Heart Association says Iowa’s law that forbids smoking in public places — including workplaces and restaurants — only applies to tobacco products.

“So if we reclassify these products as a vapor product rather than what they really are, it’ll weaken our Smoke-Free Air Act,” Freelund says.

Subcommittees in both the Iowa House and Senate have approved the bill this afternoon. Senator Herman Quirmbach, a Democrat from Ames, said he wants to act quickly to ensure kids aren’t buying e-cigarettes.

“I appreciate the concerns that you have, but my feeling is let’s close this door now, get it nailed shut and then we’ll worry about the other considerations down the line,”Quirmbach said, “all of which are valid.”

Others, like Representative Chip Baltimore, a Republican from Boone, said e-cigarettes should not be taxed like cigarettes or cigars nor should they be subject to the Smoke-Free Air Act.

“From a cancer-causing perspective, I think the lack of a burning, smoke-causing product is a major difference between a tobacco product and an e-cigarette,” said Baltimore. 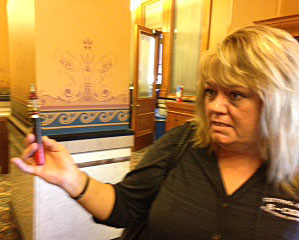 “I’ve tried Chantix. I’ve tried the patch. I’ve done Wellbutrine. Nothing but this e-cigarette has done it for me. I mean I was almost (smoking) four packs of Bronson King Full Flavors a day,” Stoneburner told reporters after the subcommittee meeting. “I was in the hospital every year with chronic bronchitis and pneumonia. First year in the last five years I was not in the hospital was  last winter.”

Stoneburner has stopped providing day care in her home to go to work for a company that sells e-cigarettes. Julie Woessner of Des Moines is the legislative director for a group called the Consumer Advocates for a Smoke-Free Alternatives Association.

“We are very supportive of this bill,” Woessner told lawmakers. “We feel that it strikes a very fair balance and it’s a reasoned approach to banning sales to minors, but still allowing access to these life-saving products.”

The bills to ban the sale of e-cigarettes to those under the age of 18 are now ready for debate in committees in the House and Senate.