You are here: Home / News / Iowa in midst of 9th coldest winter in 121 years of records (AUDIO) 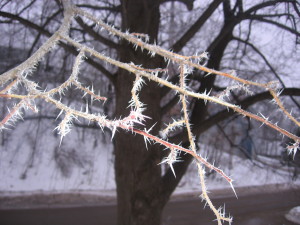 To most Iowans, it’s felt like an extremely cold winter and the record books back it up.

State Climatologist Harry Hillaker says, over the last four months, the statewide average temperature has been 30.1 degrees. “It’s been the 9th coldest October through January period in the past 121 years,” Hillaker said.

The coldest stretch from October through the third week of January was in the winter of 1976-1977, when the average temperature was 26.7 degrees. The most recent winter when it was this cold, for this long, was in 2000-2001, when the daily statewide average was an even 30 degrees.

Thus far, the coldest temperature recorded in Iowa this winter came on Christmas Eve day in Osceola: 27-below zero.

The long cold spells this winter have been broken-up by some rather dramatic, short-lived warmups. Earlier this month, Sioux City hit 65 degrees and temperatures were in the 50s across much of southern Iowa this past Sunday.