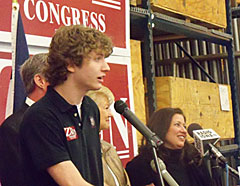 A Republican state senator from Urbandale is making another run for congress. Brad Zaun’s son Grayson introduced him today at a Clive manufacturing business that makes mufflers. “We may not agree on everything, but I know that if Brad is able to bring half the level-headedness and wisdom that he has brought into my life into congress, then we will be better off for it. So please give it up for my dad, Brad Zaun,” Grayson Zaun said.

Brad Zaun was joined on stage by his two other sons and his wife. Zaun talked about his decision to run for the Third District seat being left open by the retirement of Tom Latham. “When congressman Latham decided to retire, and I found that out as a shock probably like everybody in this room. And my wife said ‘you’re going to run aren’t you?’ I was really surprised by that considering the last go round we went through,” Zaun said to laugher. “But she said, ‘suck it up, it’s nine months, it’s the same I went through carrying our children.”

Zaun was making reference to the 2010 congressional race he lost to Leonard Boswell following a contentious campaign.  He was asked after the announcement how he would approach this campaign differently. “One thing I would tell you, is I’m not going to let these dirty tactics and political attacks on me — I’m not going to let them be out there and not respond to ’em,” Zaun replied. “I’m smarter this time. I go in this with my eyes wide opened and I’ve learned a lot of lessons. I am going to be a lot more relaxed this time, I was certainly a lot more intimidated last time.” 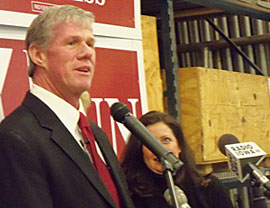 Brad Zaun talks about running for congress as his wife looks on.

He said he was able to win a seven person primary the last time around and will use that same formula again. “One thing that’s gonna be different this time is I’m not running against an incumbent. So, I know that there’s going to be a lot of money spent in this race and I’ve been assured if I win the nomination I’m going to have Republicans and the…N-R-C behind me,” Zaun said.

Zaun ran a hardware store and was on the Urbandale city council and mayor before running for the Iowa Senate. Zaun said there are some good candidates in the race, but said his own background best prepares him for congress. “My message was experience running a business, many businesses, and my public service experience as well, I think is what separates me,” Zaun said. “I’ve taken votes, I’ve stood up, I don’t think you have to guess who I am and where I am going to be on the issues. I think I am gonna be someone who look everybody in the eye and tell them ‘this is the way it is and this is where I am going to be on the issue.'”