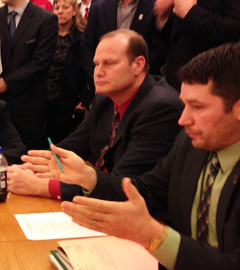 Advocates for an increase in the state gas tax flooded the statehouse today — just as a bill cleared a House subcommittee that would raise the gas tax by a dime over the next three years. Representative Josh Byrnes, a Republican from Osage, was among the five House subcommittee members who voted for it.

“We’ve got to do something,” Byrnes said to a packed room. “I don’t think there’s a person in here that argues the point that our infrastructure is aging.”

Governor Terry Branstad has consistently said he will not veto a gas tax increase if it clears the legislature and he spoke at a “Transportation Day” rally at the statehouse.

“We need to continue to consider a number of options and discuss the merits and potential challenges associated with each of them,” Branstad said. “I’ve been around long enough to know it’s not an easy task.”

Ralph Arthur, chairman of the Iowa Motor Truck Association’s board of directors, said the “reality” is Iowa’s crumbling transportation system makes it harder to attract new business to the state.

Larry Winum, a banker from Glenwood, said it’s time to raise the gas tax because “there’s nothing else” to cut in state, county and city transportation budgets.

“Bankers — we don’t like to talk about a tax increase…but we like to look at this as an investment,” Winum said during the rally. “It’s a user fee. It’s something that we need and, quite honestly, it has a lot to do with economic development.”

Winum is chairman of the Mills County Economic Development Foundation and co-chairman of the Southwest Iowa Coalition Transportation Committee. City and county officials say they’re struggling to maintain roads and bridges and have raised local property taxes to fix roads because gas tax revenue is falling short. John Miller — a member of the Black Hawk County Board of Supervisors — said it’s a tough situation.

“We have $35 million plus that we bonded for,” Miller told legislators. “We had no other choice.”

Terry Cox is the city manager, the public works director and the city engineer in Harlan and he made the trek to the statehouse to show his support of a gas tax increase, too.

“I just want to support you guys here,” Cox told legislators. “It’s…a tough nut to crack, but I think you’re going to get it done.”

In a transportation related move, Iowa’s Republican governor has appointed former Congressman Leonard Boswell to the Iowa Transportation Commission. Boswell, a Democrat, lost his 2012 bid for reelection to the U.S. House. State boards and commissions are, by law, to be balanced by political affiliation.  Boswell replaces a Democrat from Oskaloosa who resigned from the Transportation Commission due to a business-related conflict of interest.