You are here: Home / News / Iowa Lottery Board approves purchase of new building 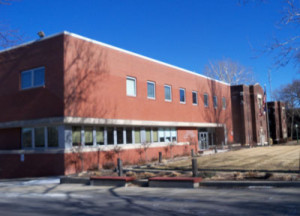 The Iowa Lottery Board has approved spending $5.35-million on a new building in Clive to become the new Iowa Lottery headquarters.

Lottery officials began looking at options for a new building after determining it would cost thousands of dollars to upgrade the heating and cooling systems in their current location west of downtown Des Moines.

The Iowa Department of Administrative Services conducted the search for the new building. Ben Bracket of the DAS real estate team says they needed to find a new facility that wouldn’t hamper Iowa Lottery operations. “The lottery can bring in up to a million dollars a day in revenue, so a really big thing is avoiding a potential loss in revenue and avoiding a significant interrupt of business,” Bracket told the board.

Bracket says the also looked at the cost and found the cost to renovate and use the existing building over 10 years would be $7.1-million. The cost to lease space would be $10.4-million over 10 years, which he says is also above the cost of purchasing of this building. “Our effective occupancy cost is as low as $2.8-million, so obviously there’s a big significant difference in those three options,” Bracket says. And he says the sale of the old building could bring down the 10-year occupancy cost of the new building. 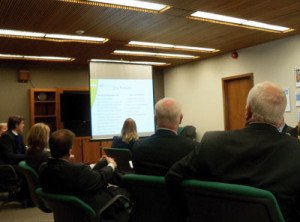 Iowa Lottery Board members watch a presentation on the proposed new building.

Lottery CEO Terry Rich says the new location in the western suburbs of Des Moines keeps the headquarters in a central location in the state. “We wanted it along I-235 or close to the I-80/35 corridor….We wanted to make it really convenient for all Iowans and I think this makes it that way,” Rich says.

The purchase must now be approved by the state executive committee that’s made up of the governor and other top elected officials.

“Once that’s approved, then we have 60 days due diligence and that’s where the real work begins,” Rich says. “That’s where we kick the tires, make sure all the pipes are working in this cold weather, make sure everything is working they way they said it would be in the letter of intent.”

The current Iowa Lottery building is over 50 years old, but Rich says it’s in a location that makes it desirable for someone interested in buying it.

Rich says the building is right across from the Terrace Hill governor’s mansion on Grand Avenue, and the lottery also has the land behind the building along Ingersol Avenue.