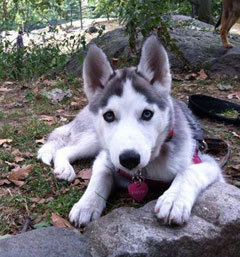 A Siberian Husky from Cedar Rapids will be one of the “players” in this Sunday’s Puppy Bowl X airing on the Animal Planet. Carl Bromberg is the owner of Suri. “Back in early August, Animal Planet had a casting call and we sent in some pictures of (Suri). Two weeks later, they said ‘bring her,'” Bromberg said.

Suri joined other puppies from all over the country in New York City for the TV program’s taping last fall. “It was a lot of fun. There were so many puppies there,” Bromberg said. “It was just cuteness overload, that’s the best way I can explain it.” Suri’s mom, Jesse, was a rescue dog from Last Hope Animal Rescue.

Joining Suri in New York was Cici, another rescue dog from Last Hope. Both Suri and Cici will be at a Puppy Bowl X watch party this Sunday to benefit Last Hope. The event is from 1-5 p.m. at Shuey’s Restaurant in Shueyville. “It will raise some awareness and hopefully a little bit of money for (Last Hope),” Bromberg said. “We rely totally on donations to operate.”