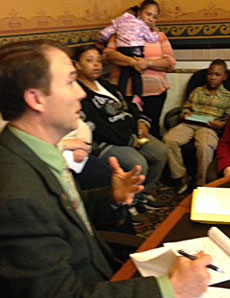 A bill that would let 12- and 13-year-olds use pistols and revolvers as well as the ammunition — if they’re being supervised by an adult — has cleared its first hurdle in the Iowa House.

Representative Dan Muhlbauer, a Democrat from Manilla, said it’s a bill that promotes education and training.

“Showing these people — these young kids, the proper way to handle a gun (and) the concerns that go along with it,” Muhlbauer said.

Representative Greg Heartsill, a Republican from Columbia, said he nearly put his own eye out with a pellet gun when he was a youngster because he didn’t have proper training.

“I am a gun owner. I have lots of children that have experience with handling fire arms. We teach them fire arm safety,” Heartsill said. “I would argue that my kids are more prepared when encountering a gun situation than I was a child and didn’t have that kind of training.”

Critics of the plan voiced their objections during a House subcommittee hearing on Thursday. Eight-year-old Luther Johnson of Des Moines told legislators he started a group called “Kids Against Violence” after his older brother was shot with a pellet gun last summer.

“I don’t like seeing people getting hurt,” Johnson said. “…I’m scared at 12 years old they might hurt someone really bad.”

“If we teach you about guns and we say it’s o.k. for you to have a gun and you’re 12, then your respect for that gun, I’m afraid, goes down or you’re tempted to show off to your friends,” Adams said. “…I cannot imagine how we would think that 12 year olds ought to have access to (a) gun.”

Rick Miller, a former art teacher in Newton, told lawmakers 12- and 13-year-olds aren’t “mentally ready” to handle and fire a pistol or revolver.

“And so I’m here to say, ‘This is too young,'” Miller said. “This is blurring the line between childhood and adulthood.”

“I can’t see a reason for more access to guns for children in Iowa,” Carter said.

Others spoke of incidents in which children injured or killed others with a handgun. Representative Clel Baudler, a Republican from Greenfield, responded.

“You can’t legislate stupidity,” Baudler told those who’d gathered for the subcommittee meeting. “When I hear some of these stories, that’s what it is — stupidity in raising kids. Sorry to have to say that, but that’s the truth.”

Under current state law, Iowans between the ages of 14 and 21 can handle pistols and revolvers if they’re under the direct supervision of an adult. The bill that would lower the legal pistol-handling age to 12 has cleared a House subcommittee.  State laws for “long guns” used for hunting are different, as 11 year olds can take hunter training courses and, when they turn 12, they can start hunting with an adult.