You are here: Home / News / Blowing and drifting expected with latest round of snow 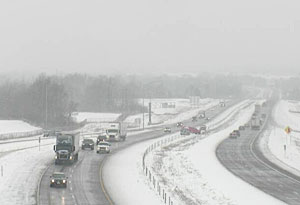 Forecasters say much of Iowa is seeing snowflakes fly today while south-central Iowa could get as much as 8 or 9 inches of snow by Wednesday morning.

Meteorologist Jim Lee says there will be snow off-and-on much of the day, with heavier snow late this afternoon.

By this evening, he says the big problem will be the winds whipping up the new-fallen flakes. “We’re looking for increasing northwest-to-north winds tonight, particularly after sunset, reaching speeds of 15 to 25 miles an hour with higher gusts tonight,” Lee says. “We’re not expecting blizzard conditions but we will see some blowing and drifting of snow that will primarily effect travel.”

When the snow quits flying, Lee says the frigid weather will settle in. “We will see much colder temperatures and bitter wind chills returning from late Wednesday into Thursday,” Lee says. “Those could pose a danger to people venturing outdoors. After that, it looks pretty quiet with maybe some light snow this weekend, but nothing big to speak of.”

See the full forecast at weather.gov or to check on road conditions, visit 511ia.gov.