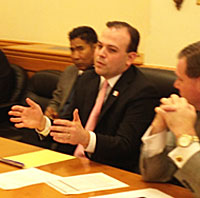 Iowa’s Republican Secretary of State is asking for state funding to continue investigating cases of alleged voter fraud, but key Democrats say the request is “highly unlikely” to be granted.

Over the past two years, Secretary of State Matt Schultz has used federal “Help America Vote Act” grants to finance the work of a DCI agent who has uncovered 26 cases of alleged voter fraud.

“We wanted to see if there was a problem,” Schultz told a group of legislators this morning. “And if there wasn’t, I wouldn’t have come to you and asked for an additional $140,000.”

Schultz said the federally-funded investigation is wrapping up and he’ll present a report to legislators in March.

“We’re going to show there’s a problem and that this problem may continue,” Schultz said, “so that’s why we’re asking, in order to make sure we can keep cleaning up administering elections, that we receive those additional funds.”

Five of the 26 cases of alleged voter fraud have yielded guilty pleas.

“I think most Iowans are good, upstanding people who don’t break the law, but we do have a few who do,” Schultz said. “…If somebody votes — whether they have criminal intent or not — and they’re not supposed to, they’re cancelling out the vote of a legitimate Iowan who has that right and we can’t let that happen.”

Schultz spoke today with members of a state senate subcommittee that drafts the budget for his office. Senator Liz Mathis, a Democrat from Robins who is the subcommittee’s chairwoman, said an investigation that results in five guilty pleas does not prove voter fraud is a problem in Iowa.

“I don’t consider that to be a large number, considering we’ve spent two years and $240,000 on that,” Mathis told reporters after the meeting. “…What he initially went out to try to task was are people deliberately going out to the polls and trying to misuse voter rights in some way and, as he says, cancel out someone else’s legitimate vote. I don’t think he’s proven that over the last two years.”

Schultz is not seeking reelection as secretary of state. He’s running for Iowa’s third district congressional seat. Some of his fellow Republicans accused Democrats of “scurrilous personal attacks” against Schultz. Senator Dennis Guth — a Republican from Klemme — said Democrats were “trying to shoot the mailman” delivering bad news about election fraud because Schultz has a “different political philosophy.”