You are here: Home / Sports / Top receiver from Urbandale signs with Iowa State 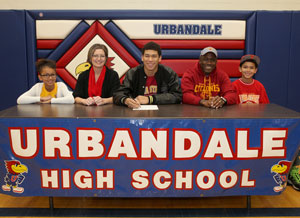 One of the top recruits in the country made it official this morning as Urbandale receiver Allen Lazard signed a letter of intent with Iowa State.

Lazard committed to ISU back in December of 2012 and never wavered on the commitment despite the Cyclones 3-9 record this past season. “It is definitely a big part of my commitment…that’s the how my parents raised me,” Lazard says.

Lazard has been part of the recruiting process since his sophomore year and says he has tried to enjoy the process. “It’s really crazy, 20 years ago it was completely different,” Lazard says.

He says he talked to assistant principal who signed a letter to play at Eastern Illinois at his house without any news conference, which shows how much the whole process has changed.  Lazard says he enjoyed the whole process and meeting so many new people.

Lazard says he is glad it is over and he can now focus on the remainder of his senior year. “It didn’t really hit me until I was actually signing the papers this morning. That’s probably the biggest part where I realized this is a pretty big step in my life,” Lazard says.

Lazard had more than one thousand yards in receiving and 16 touchdowns this past season.