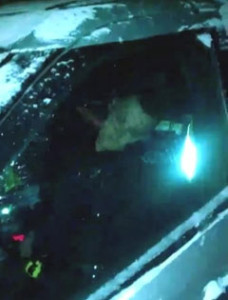 Photo that appears to be sleeping police officer.

A yet to be identified police officer in eastern Iowa could be in trouble for sleeping on the job. Dillon Meier of Anamosa says he spotted a local police officer asleep on duty and has a picture to prove it.

Meier says he was removing snow from the parking lot of Jones County Abstract and Title early Wednesday when he noticed an Anamosa Police car parked nearby. The squad car hadn’t moved for about an hour. “The car was sitting, backed up in there, tight to the building. We needed to move it and the cop was sleeping in it,” Meier said.

A friend of Meier’s shot a video of the sleeping officer and then took a picture, which Meier shared with KCRG-TV in Cedar Rapids. “Completely asleep, took video, had the skid loader lights on the car,” Meier said. Officials at the Anamosa Police Department told KCRG they couldn’t confirm whether the photo showed one of their officers, but said the department is investigating the situation.

Anamosa resident Joe Mausser believes the photo is authentic. “If he’s on duty and he’s doing it, I wouldn’t be too happy with him,” Mausser said. “I know we’re not paying for him to sleep on duty.” In 2011, something similar happened in Cedar Rapids. A police officer was photographed snoozing on duty in his squad car and was later disciplined.

Whether or not the Anamosa photo is a picture of the same thing is still in question for some, but not Meier. “It’s pretty unfortunate considering all the break-ins we’ve been having downtown…not good timing,” Meier said. The photo was captured at 4 a.m. on Wednesday, according to Meier.