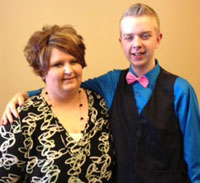 A teenager from Tipton and his mother made a trek to the statehouse Thursday to lobby for legislation that would give schools more authority to deal with bullying that happens both on and off school grounds.  Eighteen-year-old Jake Stallman says the bullying started when he was a fifth grader, then escalated in junior high when he told a friend he was gay.

“And then she told one friend who told another, so the next day I was outed in school,” says Stallman, a six-foot-four inch high school senior who is on the school’s cheer squad.

McAtee says she had a hard time getting school officials to take her son’s plight seriously.

“It’s time something is done because not doing anything — it’s only going to get worse,” McAtee says.

Stallman says one of his toughest times came when he was a freshman, after some other kids in his high school posted a threat on Facebook.

“That they were going to come rearrange my face and I was scared, so I had my best friends…and they walked me from class-to-class every day, for a whole week,” he says.

Stallman started a blog called “Jake’s Place” last May and he recently posted an interview with Steve Grand, who is the first openly gay country music artist.

“I want to get the message (out) that not only are small town Iowans having a problem with bulling, but also big music stars,” Stallman says, “so that’s what I like to blog about.”

Stallman and his mother spoke Thursday with three legislators who working on anti-bullying legislation. A small group of senators are also drafting a bill that addresses concerns about how schools deal with bullying.